Promoted by the Ponta Delgada Public Library and Regional Archive and the Green Gardens – Azores project, the exhibition Plants and Gardens: The Passion for Ornamental Horticulture on the Island of São Miguel opened on February 22 at 6:00 PM. The catalog is now available to the public.

Plants and Gardens: The Passion for Ornamental Horticulture on the Island of São Miguel 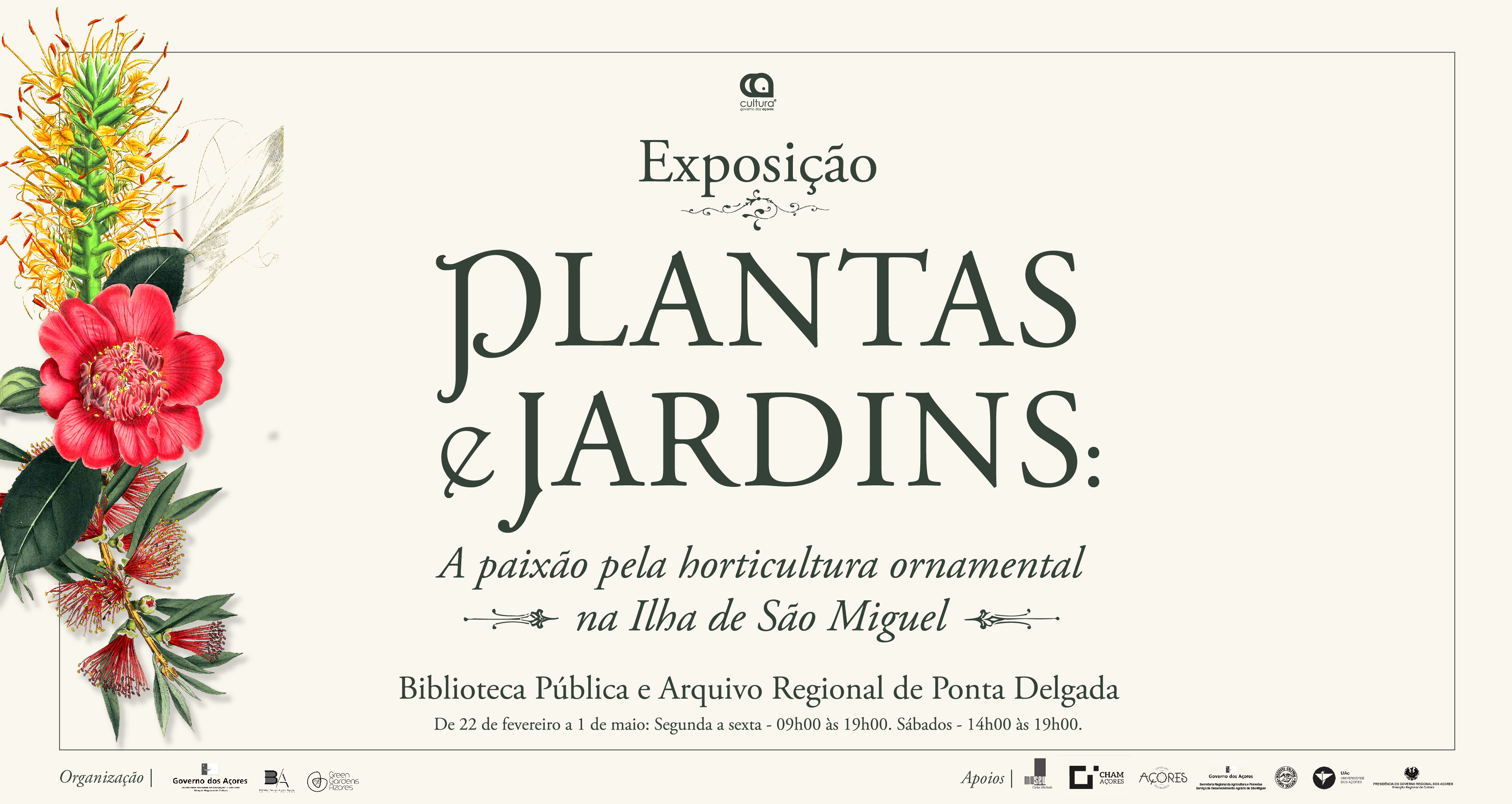 Promoted by the Ponta Delgada Public Library and Regional Archive and the Green Gardens – Azores project, the exhibition Plants and Gardens: The Passion for Ornamental Horticulture on the Island of São Miguel opened on February 22 at 6:00 PM. The catalog is now available to the public.

Curated by Professor Isabel Soares de Albergaria, the exhibition was opened from February 22 to May 1 this year. This initiative aimed to look retrospectively and concisely at a cultural movement that broaden the perspectives of those interested in ornamental gardening and horticulture and that began during the Age of Enlightenment in the great European centers and later extended to their peripheries. Based on the case study of the island of São Miguel, this exhibition included several documents, bibliographical and iconographic items and other objects related to this topic mainly from the Public Library and Regional Archive collections but also from other institutional and private collections, namely from the Library, Archive and Museum of the University of the Azores, the Carlos Machado Museum, the Ponta Delgada Tourist Office and the Marquês Jácome Correia Private Archive and Library.

This exhibition aimed to promote the knowledge not only of the origin and first imports into Europe of a number of plants that can be found in the gardens of São Miguel and in Azorean landscapes, but also of those who ordered them and their motivations, not forgetting the suppliers, vehicles and means of transportation of the plants and their cultivation and acclimatization in light of the technical and scientific innovations of the 19th century. The exhibition equally focused on the transmutation of meanings operated by the representation, exhibition and dissemination of knowledge generated by the spread of exotic plants throughout the island, along with the inevitable symbolic, economic and ecological consequences.

Coordinated by Professor Isabel Soares de Albergaria, the catalog is divided into two parts, the first of which includes five studies that focus on different areas and disciplinary fields but that have the plants and gardens of São Miguel as a common denominator. In the second part, we can find the texts that provide a background for the four sections that make up the exhibition, namely The Knowledge of Plants, Order and Transportation, Cultivation and Cultural Assimilation.

Contextualized and supplemented by the coordinator’s texts, this publication is a rigorous and informed contribution to deepen the reflection on the role of conservation, dissemination, protection and promotion of a document, botany, landscape and environment-based heritage whose cultural and even tourist value seems to be particularly relevant in the context of the island of São Miguel, in particular, and of the Azores in general. Ana Duarte Rodrigues, a renowned specialist in the history of gardens, approaches garden exhibitions from a current and broad perspective and sees them as privileged tools for revealing the immense creative work of garden design and composition, the scientific knowledge of botany and horticulture, the technological challenges that had to be overcome and the personalities that played a fundamental role in the development of the art of gardens. Maria João Pereira, a biologist at the University of the Azores and a researcher at the GreenGA and IGA (Innovation Green Azores) projects, analyzes the plant diversity of the gardens of the Azores and its botanical legacy, unveiling partial and hitherto unpublished findings of the research carried out by the Green Gardens - Azores project. Raimundo Quintal, a renowned expert in the field of biogeography and a great friend of the gardens of the Azores, puts forward a documented proposal for the classification of the Monumental Trees that exist in the gardens, parks and woodlands of São Miguel. Rosalina Gabriel, a biologist specialized in Plant Ecology at the University of the Azores, a researcher at the GreenGA project and a member of the Azorean Biodiversity Group, discusses the role of gardens in the spread of exotic and invasive species based on the idea that there is no rose without a thorn. Finally, Isabel Iva Matos Cogumbreiro Garcia, Head of the Library and Documentation Division, takes us on an analytical tour of the Library’s document collection dedicated to plants and gardens and to their contribution to identity building.

This event is part of the project "Green Gardens - Azores" (ACORES-01- 0145FEDER-000070), financed by the ERDF at 85% through the Operational Program for the Azores in 2020 and regional funds by 15% through the Regional Science and Technology Directorate .